Swades-My take of the movie !!

The first time I heard about Swades, I laughed it away. I just thought it had Shahrukh Khan as a hero. Its not gonna be a good movie. So, I left it aside and forgot about it. A year or two later, I visited Crossword for buying Nayak's DVD. I did not get it there as it was not available. There I saw Swades Special Edition DVDs. My younger brother insisted that we buy the DVD. But I was adamant that Shahrukh Khan movies should not be viewed and that too after wasting Rs. 499 for that DVD.
On 15th August, 2007, the movie was being aired on Doordarshan. I thought for some time and decided to watch the movie as I had absolutely no other work to do.
The movie began, with a quote from Mahatma Gandhi:

"Hesitating to act because the whole vision might not be achieved, or because others do not yet share it, is an attitude that only hinders progress."

I said well... This movie must be seen.. coz back then in 2004, I dont think any movie started with a quote and that too from the father of nation !!
While watching the movie, everything was normal. Everything seemed to be running smoothly. I just watched all the scenes as they came by and listened to the songs. All was well and the movie ended like a fairy tale for me.
It was around 1a.m. in the morning by the time the movie had ended. I switched off my T.V. and went for a good night sleep. It was then that I realised that there was silence all around. This was not the silence in my surroundings, instead, it was the silence within. I had never heard the silence within. I wondered what it had to say.
The voice within had began to speak and the entire movie began to flash in front of my eyes as though I hadn't just watched it, instead as if I went through it.

I saw the quote at the beginning of the movie. It was written by Mohandas K. Gandhi. The name of shahrukh's character, Mohan Bhargava, was derived from the Father of our Nation. The scene was then Fast Forwarded to the opening credits. This made me realise how Beautifully the Coming-Home scene was directed. My surroundings again changed and then I was into the Book Shop. I realised that its name was "Pathfinder". How amazing I thought. Mohan's journey of discovering himself began at a shop called "Pathfinder".  Suddenly there's a noise of some books falling down. "Kitabe Gyan deti hai, Sanskar deti hai, agar aap inki ijjat karna nahi jante to fir yahan aaye hi kyun?" I could also hear the bakground score ringing in my ears. Then my eyes turn towards the desk at which Mohan was seated. The book on his desk.. The book was named "bapu kuti". This is the same book on which the story of Swades is based. I was shocked. I never had seen so many hidden messages in a bollywood movie before this. At that moment I knew. I knew that this will not only be a flashback of how Mohan's Life was changed, it will also be changing me forever.
The next, I was into the caravan with Mohan. We were enjoying the sweet, old tunes when we realised that something is wrong. Then we see a Makrand Deshpande as a fakir. Mohan tells him "shayad maine koi mod galat le liya ho". To this he replies, "Mod galat nahi hote, Insan galat hote hai". How true I thought. He had loads more to tell when he boarded the caravan. In the form of a song the radio began

Yun hi chala chal rahi, Yun hi chala chal rahi,
Kitni hasin hai ye duniya....
....Jeevan Gadi hai Samay Paiyya
....Har Sapna sach lage, jo prem agan jale, jo rah tu chale apne man ki....
I actually felt the song. Till that day I just heard it coz it had good composition. Then I understood that the lyrics was by far the best I had heard till date.
We then reached "Charanpur". As a thanks giving gesture, Mohan hands over a Mineral Water bottle to the fakir. This actually meant a lot when we think it from Mohan's point of view. Mohan then asks a shop keeper the address of his Kaveri Amma. Then Chiku guides us through the small lanes of the village. When he enters the house, Kaveri Amma hands over a cup of water. He acts as if he drinks and then keeps the glass away.
The scene again changed and we were in the school. The way Dadaji teached the students. Man, I was jealous of  those students coz they were so lucky to get such an innocent teacher. Then Mohan interrupts Geeta. While leaving Mohan does say, "Main Chalta Hun". Double Meaning...    :)
The scene to appear was at Geeta's House. He tries to start the Leg Massager and realises there is no current... Night appears and preparations are on for sleeping. When they are alone, Geeta asks Mohan if he really is an astronaut. He smiles... After some time, he refuses to sleep inside the house and sleeps in his caravan. The Sun rises and I witness the Cigarette scene in the caravn. Next Scene- Cut to: End of the Panchayat. There the local weatherman says "Aasman saaf hai, do dino tak Baadal najar nahi aayenge" just by looking at the sky. Next, the temple scene. Here we get to know the reason as to why the village was named "Charanpur". I understood that this is a well thought and very innocently written script.

The next scene: Mohan is seen to be sleeping inside the house till late morning. He also confesses, "Bahut dino se itni gehri nind nahi soya"..very contrary to what he thought.. I saw that change in me too.. When the groom comes for seeing Geeta, when Geeta enters, the look on Mohan's face confirms that the direction was too good For shahrukh to be himself. It was as if Ashutosh was invisible on the scene, standing with a ruler, giving shahrukh a whak if he tried to be himself. :) As the scene unfolds, we see the messages coming out clearly:

While having lunch, the messages start getting stronger.. Ritiriwaj, Parampara, Vishwas....

the difficult kaam begins...
the scene at birsa's house was touching. CHILD MARRAIGE !! Another issue was touched.

The current loss interrupts the movie only too give way to another masterpiece. Taro se bana Hal... "Yeh Tara Woh Tara"

This song took me to another level.

The scenes raise their level with the introduction of Saawariyan Saawariyan.. The lush green/yelow fields, the train scene, boat scene, bus scene etc. The journey took me even deeper into my heart and thoughts.

HARIDAS !! I still recall each and every moment in his house. This was a high point for me. The shot where Mohan lies on a cot staring at the moon gripped me. I was all over it. The return journey  in train only confirmed that the message was very very clear. It was straight from the very core of Ashutosh Gowariker's heart. It hits the right cord. It is here that we see what a sorry state we are living in.

Cut to: Dussehra at School.

New students are admitted to the school on the auspicious day of Dussehra. (The Blackboard visible when the books are being distributed bears an AGPPL Logo). Back to the serious scene: Sanskar aur Parampara. According to me, this is the best scene ever filmed on the ritiriwaj, sanskar and parampara thing.

The next scenes were of how Mohan tackles the electricity problem. (By the way, Aravinda Pillalamarri and Ravi Kuchimanchi, both dedicated Association for India's Development (AID) volunteers, are the NRI couple who returned to India and developed the pedal power generator to light remote, off-the-grid village schools. The name of village is Bilgaon, an Adivasi village in the Narmada valley, which is the backdrop of the Narmada Bachao Andolan (NBA) movement.)

Mohan's time for departure comes. The entire village gathers for his farewell. Apne chaukat ka diya and... giving light to neighbours house... IT HAUNTS !!! Finally the plane takes off and so does the movie.. to a height no other patriotic movie has ever reached. The time comes for the GOD of music to exhibit his skills. 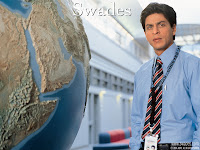 Everything about this song.. the lyrics, the composition, the picturisation, haunts...Till this date I haven't forgot the shehnai of Yeh Jo Des Hai Tera. I dont think I will ever forget it, after all the scenes I have experienced.

Finally Mohan decides to return to India, "To light the Bulb".

The next thing was that I found myself in my bed staring at the dark ceiling of my house. I wondered about what had just happened. It was as if I was into Ashutosh Gowariker's Pensive.  :)

This is true friends..every single word of it... This movie changed my life, its purpose ever since I have experienced it. Its true friends, this movie is not to be "watched", it has to be "experienced". I wonder, if this movie has made such an impact on me, who lives in India, what would have happened to the so called NRIs?

This movie was truly made from heart by Ashutosh Gowariker. The music by A. R. Rahman, as always, is amazing. Ye Jo Des Hai Tera will keep on  haunting for generations...A.G. truly needs to be applauded for his brave attempt. I dont see any other movie getting close to Swades in terms of direction, music composition and story telling. Swades is indeed a MASTERPIECE. To this date, I am repenting of not having purchased its Special Edition DVD.

I shall end my expeirence by a quote from a famous movie. It describes my emotions perfectly.

"Sometimes I feel like I'm seeing all the beauty at once, and it's too much, my heart fills up like a balloon that's about to burst... And then I remember to relax, and stop trying to hold on to it, and then it flows through me like rain and I can't feel anything but gratitude for every single moment of my stupid little life... You have no idea what I'm talking about, I'm sure. But don't worry... you will someday."