The Journey from Hell to Heaven

The film begins with a bang. Shots are fired at Shahid Azmi on 11th February 2010 at point blank range. Before the moment sinks in, we hear Shahid explaining a quote by Roy Black,

“By showing me injustice, he taught me to love justice. By teaching me what pain and humiliation were all about, he awakened my heart to mercy. Through these hardships I learned hard lessons. Fight against prejudice, battle the oppressors, support the underdog. Question authority, shake up the system, never be discouraged by hard times and hard people. Embrace those who are placed last, to whom even bottom looks like up. It took me some time to find my mission in life – that of a criminal defense lawyer. But that ‘school’, and that Teacher, put me on my true path. I will never be discouraged. Even thorns and thistles can teach you something, and lead to success.”

The next scene shown is almost 17 years back, from January 1993 in Govandi (Mumbai, then Bombay). We see the Azmi family lying peacefully in their home and only a few minutes later, there is utter chaos, fights, fire etc. all around portraying the riots at that time. The family is frightened, angry and sad all at the same time in angst of the situation. This very scene is enough to prove that the acting, direction, narration and sound of this film will haunt us in our lives. Needless to say, Rajkumar Rao, Mohammed Zeeshan Ayyub & Baljinder Kaur make their mark right at the beginning of the film. 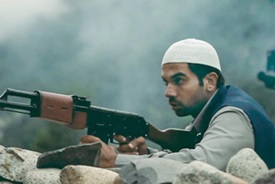 At age 14, Azmi was arrested (or detained) by Mumbai police for indulging in violence during the 1992 Mumbai communal riots. Since he was a juvenile, he was let off leniently and did not serve time in jail. The next few minutes exhibit the consequences of a disillusioned & confused Shahid, deeply affected after the 1992 – 1993 riots, who joins the Jammu Kashmir Liberation Front (JKLF), a militant organization based in the valley. Few scenes depict his uncomfortable life at his training and show how Shahid’s consciousness tries to fight a war within, contradicting teachings of his militant trainings. The acting and direction is so brilliant that we literally see Shahid’s mind and soul both running out of his body when he physically tries running away after watching a man’s head getting chopped off. Somehow, he manages to escape the group and returns back to his home in Mumbai. 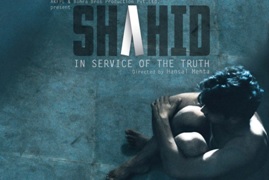 But his past follows him in Mumbai. The police detain him and charge him with several sections under POTA (Prevention of Terrorism Act) in 1994. He was imprisoned for conspiring to murder the Jammu & Kashmir political leader Dr. Farooq Abdullah. The police, under the pretext of reducing his sentence, took a confession statement from Shahid after a lot of torture, which was the only evidence they had against him. Shahid, was kept at Tihar jail, a maximum security jail, when he was undergoing his trial. During this same time, we see that Omar Shaikh (prime accused of kidnapping Daniel Pearl, links to 9/11 attacks only to list a few) was also being detained at the same prison. However, we see that Shahid decides to study law whilst in prison. Shahid spent an overall 7 years in Tihar jail where he started his college education, first graduation followed by a postgraduate course in creative writing; once he was acquitted of the charges, he went to study for a law degree (LLM) in Mumbai.
There’s a beautiful dialogue when Shahid is acquitted of all charges, which strengthens Shahid’s confidence. Kay Kay Menon says (on Shahid’s acquittal), “It takes time, but it works. Indian Judiciary works.” This goes on to become one of the fighting causes of Shahid’s law career ahead.
When Shahid returns home, the moment of Shahid’s reunion with his family is once again beautifully portrayed and makes us relive the moment of their happiness.
After completing his Law, Shahid joins a law firm where his ethics and values stood against the business minded law firms. He then decides to start his own practice as a lawyer in 2003.
While practising, another aspect of Shahid’s life, his love life is depicted, in the most subtle way possible. Without affecting the pace and intention of the movie plot, the plot is subtly merged with Shahid’s day to day life.
Of the many cases Shahid undertook, 2 are shown in the film.
1.    Zaheer Shaikh – Ghatkopar Blast accused 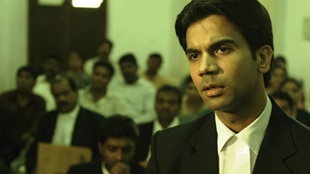 The courtroom scenes are more than brilliant and places us right in the courtrooms and make us feel the pain Shahid feels for the people who are merely arrested by the police under baseless/false grounds. His arguments in courtroom are by far few of best arguments portrayed in films. With due honour and respect, Shahid bluntly states that he is not against the arrests made by police, instead he is against the biased arrests made on the name of religion amongst the poor people who couldn’t afford to fight against the injustice. As a lawyer he saw every client as a victim of a communalized police force. He paid the police back for what he had gone through earlier in his life; he broke down the cases to the minutest of details, astonishing everyone with his grasp on the art of cross-examinations.
On the day of his murder, Shahid gets a call from his office for help. Shahid immediately rushed to his office for helping the people who had him called. Shahid was killed on 11 February 2010 in his office at Taxi Men colony in Kurla, when four gunmen entered his office and shot two bullets, point blank and fled. This was when he was defending Faheem Ansari in the 26/11 attacks case.
The film ends with a solid note,

“In a career spanning 7 years, Shahid had 17 acquittals. An unusually high acquittal rate for a system that is often blamed for its inability to deliver timely justice.”

It is very rare for our bollywood to produce an authentic biopic on the life of a controversial lawyer like Late Shahid Azmi. Azmi lived an "ordinary life, with extraordinary conviction to do what he believed was right", and this story had to be told. The way and manner in which it has been told by Director Hansal Mehta and enacted by Rajkumar Rao truly bring heart and soul into the film with at par performances from all the co-actors as well. The film and the story of a righteous person who once shared spaces with terrorist like Omar Shaikh, to turn his life around for the people and their good cause, is definitely worthy to be watched.
The film is one of the best biopic of our era and is a must watch for all. The intelligent and mature audiences will cherish every moment of this movie.
The personality, charm, innocence, brutal dedication and urge to challenge the system right upfront are only few of the qualities we see in the movie Shahid. At a time when he was wronged (falsely accused of charges), his family and religion was wronged, when he comes in contact with a terrorist of global reach, Shahid Azmi could’ve easily resorted to unworthy acts, but he was determined to turn his life around. He went on to achieve such greater heights in his very short career spanning 7 years, which people can hardly reach in their entire lifetime.
Shahid Azmi once told a reporter,

“I am pained, the heart bleeds, when I hear what they have endured. But, in spite of all that, it will never be easy for me to see an innocent being sent behind bars or to the gallows only because the crime alleged was a bomb blast.”


Shahid Azmi rose from humble origins to become a symbol of hope for all those who were at the receiving end of potential miscarriages of justice. The gunmen might have killed Shahid Azmi, but his legacy and inspiration will keep on inspiring many youngsters for generations to come.
Posted by Sadanand Warty at 11:23 PM No comments: